Diabetes is characterized by changes in metabolism, high blood sugar and impaired insulin function. The ketogenic diet can help you lose excess fat, which is closely linked to type 2 diabetes, prediabetes and metabolic syndrome. 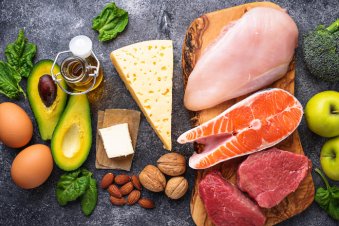 Yes! One study found that the ketogenic diet improved insulin sensitivity by a whopping 75%. Another study in people with type 2 diabetes found that 7 of the 21 participants were able to stop using all diabetes medications. In yet another study, the ketogenic group lost 24.4 pounds (11.1 kg), compared to 15.2 pounds (6.9 kg) in the higher-carb group. This is an important benefit when considering the link between weight and type 2 diabetes. Additionally, 95.2% of the ketogenic group were also able to stop or reduce diabetes medication, compared to 62% in the higher-carb group.

Why is eating a Ketogenic diet best for Type 2 diabetes?

A ketogenic diet helps people with type 2 diabetes because it allows the body to maintain glucose levels at a low but stable level. The reduced amount of carbohydrates in the diet helps eliminate large spikes in blood sugar, reducing the need for insulin.

To help people with diabetes manage their blood sugar levels, doctors will typically prescribe a diet that mostly consists of low glycemic index foods. However, according to the research, restricting overall carb intake to the point of following a keto diet may be the best way to improve the many biomarkers relevant to diabetes. In fact, this dietary strategy has been proven to be helpful for the management of type 2 diabetes and type 1 diabetes.

Type 1 diabetes, which was formerly known as juvenile diabetes, is a chronic autoimmune condition that makes the body unable to produce insulin, which is the hormone that regulates blood sugar. Without insulin, our bodies cannot use the sugar in our bloodstream as energy, causing people to experience Diabetic ketoacidosis.

It accounts for about 5–10% of all cases of diabetes. Being an autoimmune disease, it turns the body’s immune system — which normally fights harmful bacteria and viruses — against the insulin-producing cells in the pancreas. Eventually, the immune system destroys the pancreas’s ability to produce insulin. The result is blood sugar levels that are out of control and wreak havoc on the body.

A 2008 article in the Pediatrics in Review contains all the recommendations for working with children with type 1 diabetes, including the ideal diet. What do they suggest?

However, studies on how this kind of diet affects patients with type 1 diabetes are nonexistent. Interestingly, the research suggests that there may be a better diet. In fact, it is the same diet that has been found to help reverse type 2 diabetes — the ketogenic diet.

How do we know?

In one study consisting of twenty-two patients with type 1 diabetes, carbohydrate restriction was put to the test. While they were on a diet that limited them to 70-90 g carbs per day, participants had significantly less hypoglycemic (low blood sugar) episodes, lower A1C levels, and required less insulin after three months of carbohydrate restriction.

A similar result was found in another study on 48 people who had type 1 diabetes for 12 years or longer. They were simply educated on how to reduce carbohydrate consumption and lower their insulin dosages. Twenty-three of the participants were adherent to the “diet” and experienced a significant decrease in A1C after three months and four years.

Wheat and cow’s milk have been reported to cause strong immune system reactions in type 1 diabetic patients. Something that occurs less often in nondiabetics. The paleolithic-ketogenic diet limits wheat, dairy, and carbohydrate consumption making it the most promising type 1 diabetes diet we know of so far. This is because it not only normalizes glucose levels but may also halt autoimmune processes mediated by milk protein and wheat gluten as well. It is necessary to supplement Vitamin D3 while following this diet but nothing else.

Do you eat a ketogenic diet with diabetes? What are your results?

How Much Water Do I Have to Drink on Keto?

What is Keto? – Beginning Your Journey

5 thoughts on “Can Keto Help Diabetes?”

Check out my Insta!